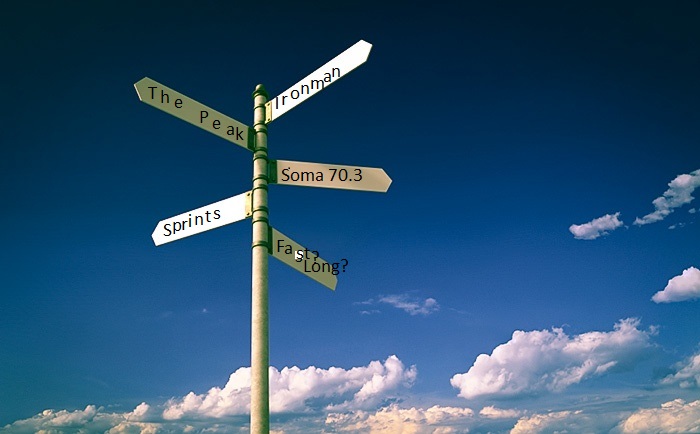 I'm not writing a race report. I did fine. My fueling was perfect. I did a lot right, and I made a few mistakes: typical race stuff. I wasn't disappointed with my race. It made me think about a few things though. That's always a good thing.

I've run many distances in my 31 years of running.

I was never one of those people who thought longer was better than going fast. There was always the issue that when I did 20 mile runs, my runs would take longer than many people. But, my dislike of distances never had anything to do with how long it took me. There are plenty of people who run much slower than me who enjoy going long.

I ventured into long distances (half marathons, marathons, oly tri's, HIMs & IM) because I wanted to try something new.

After my DNF at CDA, I swore off long distances for awhile. I went back to the sprint distances. For those runners among us, the sprint distance triathlon will take somewhere between a 10k and half marathon finish time. So, "sprint" is little bit misleading. It still requires a level of pacing. It's a different animal altogether though. In other words, it's quite a bit different than running a 5k.

Last year (2013), I sprinkled in a couple of olympic distance races. One of those races, I finished with either 2nd or 3rd place (can't remember and who honestly cares?) The 2nd olympic distance of 2013, I DNF'd. It was officially the last race of the year, and I did it the day after Tour of the Moon (on a time trial bike). For the cyclists among us, you understand how incredibly difficult it is to ride cat 1 climbs on a TT bike. The following day, I was dead. I wrote about the Tour of the Moon AND the oly race the next day.

Last year, I decided to sign up for a 70.3 for this year. I've waffled back and forth about whether or not I should do it. I made it my A race for the year. I also signed up for an Oly A race (the one yesterday). For the rest of the year, I have a bunch of sprints and one more oly race.

Clearly, this is racing more distance that I have done in a number of years, but I've also spent time building up to it.

Since that time, I have had to defend myself from all the Ironman addicts out there. I've been constantly harassed on social media (as recently as Friday of last week on Twitter) about not doing HIMs and IMs. TOTAL lack of respect for what it means to go really hard.

When I signed up for Soma last year, I kept it on the DL. I told only 2 other people until I announced it here a couple of months ago.

I love triathlon. I love the complexity of putting a swim, bike & run together. If I didn't like any of the events, I could easily become a duathlete (compete in aquathons, duathlons or aquabikes).

Even a week ago, I was gung ho ready to do SOMA. Then, I raced an oly yesterday.

When I was running, I kept thinking, "What the hell am I doing? I could be done now. I am so glad I don't have to be out here for another 2.5 hours."

I can run a half marathon. It's my favorite run distance.

But there's more. The second issue that I ran into yesterday was how much I hate pacing and racing with power. You know this. I hate the power meter. I love training with it. When I race, I just want to GO!!!

All of last year, I raced by feel. Maybe I was successful. Maybe I wasn't, but I felt great about my races afterward.

When you hit distances like the Oly, HIM and IM, pacing is EXTREMELY important. If you don't pace correctly for your course, the run is going to suck or be damn near impossible. In a sprint, if you go way over threshold, you can suffer through a 5K.

Yesterday, I was holding back and holding back. All I wanted to do was go hard, like I did last year.  BUT, I knew that I HAD to do it. (Last year, I faded badly on the run. My legs were just shot). Those climbs are no joke. It worked. I climbed the first hill without even feeling it. It was a long 10 mile climb. The second one was 1.25 miles and much much steeper. That one, I felt a wee bit.

Still, I felt stronger climbing yesterday than I did on the same course last year, and I was able to run. My legs really felt it, but I held pace better yesterday instead of drastically fading.

Comparing this year to last year, I was in much better shape this year than last year for the same race.

Still, there is the issues of time & pacing. Do I really want to plug along a race course for 6 hours? By plug along, I mean at the low HR, low power required to do this distance successfully. Plugging along has nothing to do with a particular pace or speed.

But, I felt MORE success when I broke through 28 minutes at my 5K than I did when I went 7 hours at a HIM.

Do I want to plug along anymore?

That's kind of where I am now.

So. I decided that I am going to continue on with training as is because I have another OLY tri in 2 weeks. This one is a true oly with a 1500m swim, 40K bike, 10K run. I've never done this race, but I have ridden the bike course many times. It's the old IM Boulder 70.3 bike course, which is CRAZY FAST.

And we all know how much I like going fast on the bike.

My PR for a "true" oly is 2:55, on a hilly bike course...nothing like what I rode yesterday but a course that is known for being tough.

There you go. I'm on a week to week plan now.