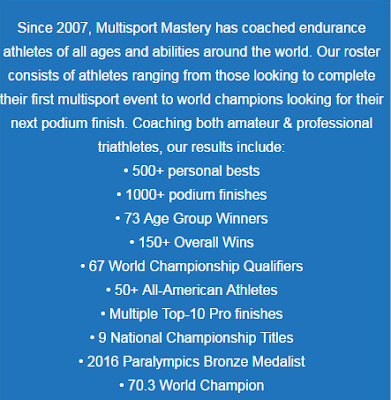 In my own words:

In Feb 2017, I found out that I qualified for Team USA. Three years ago, I was a back of the pack triathlete. Why the success in a short time? Liz develops athletes. She spends time coaching athletes.

You can read about 2016's successes here. It's easier, for me, than re-writing the information below.

John Wooden (former coach of the 10x National Champions UCLA Bruins) once said, "A good coach changes a game. A great coach changes a life". There is no Coach that embodies that quote more than Liz. I could tell you about everything I have a accomplished since I started with her 2.5 years ago, but the really important stuff is what she has taught me.

Two and half years ago, I lacked confidence as a triathlete. I lacked ability. I lacked strength (physical and mental). I didn't know how to race. I didn't know what I was doing out on a race course. I had no direction or a mentor to help me reach my goals. I had goals that I wanted to accomplish, but I was starting to think I would never reach them. I had been doing triathlon for 10 years. I'd worked with other coaches; yet, I felt like I hadn't learned anything.

How has she changed me and my thinking? I think it comes down to Liz's belief in me. When my goals are X, she believes I can accomplish Z. She believes that I can do things that aren't even on my radar. Having a coach/mentor like that, built up my own confidence. She would challenge me, constantly....physically and mentally, like I had never been challenged before. I became stronger physically and mentally. She raised the bar for what I thought I could accomplish. When I just wanted to qualify for Nationals, she is making plans for the World Championship. 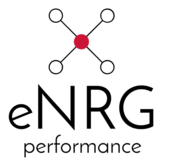 I can't recommend Dina highly enough. Early in 2015, Coach Liz recommended that I work with a nutritionist. (Likewise, so did the Best Man). I went on a hunt. I spoke to other athletes who worked with other nutritionists. At the time, I was part of a private FB page. Dina's name came up over and over.

I wanted a nutritionist for several reasons.  The big one was that I wanted to be the best athlete that I could be. Liz and I both believed that nutrition was holding me back.

Sometimes you just need that little push from someone you trust.

The results:
1.) My sleep has improved dramatically.
2.) I feel better than I ever have. No more blood sugar crashes. No cravings.
3.) No mood swings.
4.) I've lost +26lbs. This was completely unexpected. I thought I'd lose 10-12lbs.
5.) I recover from hard efforts & races FAST. In fact, Coach Liz has commented on how quickly I recover now.
6.) I'm stronger & faster than I've ever been. My power on the bike has exploded.

Not all swim practices are created equally.

Andrew constantly provides me with 1-1 coaching. He has worked with me on race strategy for a variety of race conditions. He works tirelessly on my stroke and gives me constant feedback. He has videotaped my swim. He times my splits.

He sometimes sets ridiculous goals for me to hit.....then, I hit them.

He does this all within a masters practice.

Some coaches put a workout on the board and leave the swimmers be. Andrew goes above and beyond.

Andrew has worked as a swim coach, water safety instructor, aqua fitness instructor, lifeguard and lifeguard trainer. His coaching experience spans more than 30 years in age-group and master's-level swimming. He has been with the DU Masters Swimming program since 2008. As a swimmer, Andrew has achieved a USMS top-10 ranking and finishes consistently in local, regional, national and international meets.
As a coach, Andrew serves as the USMS 2014 and 2015 High Intensity online coach, and as the lead coach for the 2015 SCY National Champion CMS Regional team. He was one of four coaches selected to lead USMS National Team attending 2014 FINA World Championships. He served as the 2012 USMS On-Deck Coach for the LCM National Champion, CMS Regional Team and as USMS On-Deck Coach for the 2013 SCY National Championships in Santa Clara, Calif. He was selected as the COMSA 2011 Coach of the Year and has been a Level 3 ASCA/USMS Certified Swimming Coach since 2009. 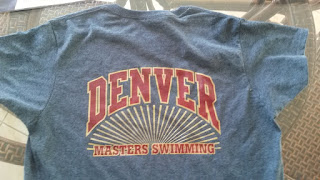