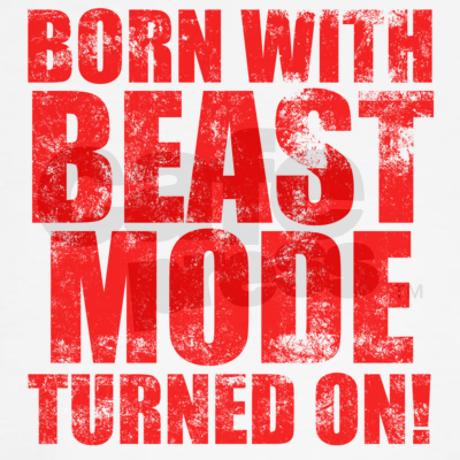 I love this image because I was absolutely NOT born with beast mode on.

In fact, whatever BEAST MODE involved, I was certain that I completely missed out on that DNA.

I've been doing a lot of reading lately about how "toughness" and "pain tolerance" are learned.  Drive, on the other hand, I think that's something we are born with. Some people are very driven, and some are more laid back. Who knows? I'm not here to argue nature versus nurture.

BEAST MODE: Last year a friend would call me BEAST all the time. In fact, I'm pretty sure he might have even said, "Beast Mode on Tea" at a race. I hated it. That wasn't me. I'm not tough like all those other triathletes. THOSE people who could seemingly push through any amount of discomfort and keep going.

I kind of thought, "Well, I don't have to be a beast. I can do my best with what I have. I can still accomplish some pretty huge goals being me and doing things my non-beastly way."

If you've been following along with my story, and I can count on one hand those of you who have been, you've probably noticed.....I've been changing.

When I started triathlon, every race was a matter of just finishing. As I got stronger, my races became focused on getting PRs.

No matter what I did, I would still get to that point of serious discomfort verging on pain....and I'd back off.
I was afraid of blowing up. I was afraid of not being able to finish.

Even though I was getting stronger, I'd still back off....right at that point. You know the point I'm talking about. It's that point, right on the edge, where we decide if we are able to continue at the pace we're at or if we think have to back off.

Over the past 12 weeks, my running has improved beyond what I even thought was possible in 12 weeks. Getting that taste of success, of snippets of speed, has made me want more. and MORE. I wanted to see what I could do.

I've found that in my speed work, my pacing days, my tired days, my hill repeats, I'm going beyond what I've always thought I could do.

It's: BRAIN OFF, BODY ON
on steroids.

Every day, I go out there, and I don't think about it. I just do it. When it hurts, I go harder. I push myself beyond the limits that I had set for myself. YEARS of self setting limits are starting to fall. I don't go out and say, "I'll hit this pace or that pace". I go out there and give everything I have for that workout, that interval.

But, I had one more fear to face. I had to do this on the swim. I'm a strong swimmer, but I've been getting increasingly frustrated at my lack of willingness to put into the swim what I've put into my running and biking.

I finally got mad enough at myself to do something about it. I didn't want to be the lead swimmer in a slower lane.

I wanted to be the slowest person in the fast lane.

So, today....I got into the 2nd fastest lane at masters. The lead guy said, "You want to swim with us today?"

I have goals to hit. The only way I'm going to hit them is by getting out of my own comfort zone, throwing out those limitations I've set for myself.

I wanted to feel it. I wanted to be as uncomfortable swimming that I have been running and biking.

We took off at a faster pace than I've ever swam.  It seemed like it was only seconds before I was hitting the wall and flipping.

At the end of the first 2 intervals, the lead swimmer would check on me. I told him I was good. We'd take off again. Then, he stopped asking me.

I wasn't. I was staying right with them. The fast swimmers.

I'm finally discovering my own tough, my own BEAST MODE.