Whatever it takes, part 3

In case you haven't looked at the calendar, it's March.

Where did the time go?

I, honestly, can't always remember thoughts that I've posted here versus what I think about when I'm training.

For some reason, the song "Best of You" popped into my head when I was running the other day.  On this particular day, I wasn't running with my ipod. I do that randomly, run without any technology.

Right after that, I thought about this song "Whatever it takes".

Months ago, I wrote about doing whatever it takes, whatever I have to do to be successful in triathlon. In fact, it became my mantra. I posted this picture on my computer screen. 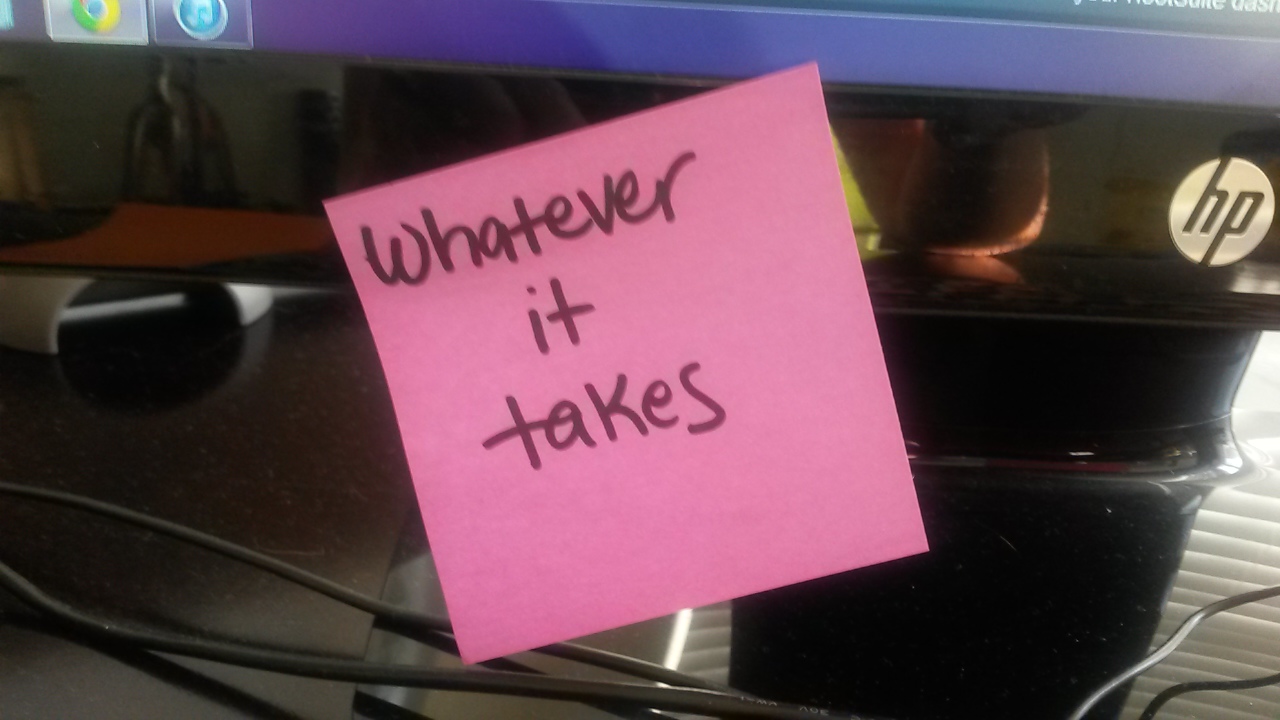 When my coach told me to leave the past in the past (not her exact words but basically that's what she was saying) and she wanted me to come up with new mantras or themes or phrases that I could use that would represent where I am now and what THIS year means to me.

I threw out that little sticky note. In fact, I threw out all the little notes I had with my old mantras. I even threw out little sheets with my goals written on them.

Then this week I was running. It was one of those truly bad runs. I had just run a PR race. It was 2 days later. The best way I could describe the run was that I must have looked like I had a stick up my butt. It was so hard to run. The run was short (40 min). It was an easy effort the entire time, but it certainly didn't feel easy. My legs felt like they were being pulled down into the depths of hell. I could hear my breath, labored at best.

I thought for a minute that this is the exact type of run that is very easy to blow off. My body certainly didn't want to be moving, let alone running....errrr.....maybe hobbling was more appropriate.

I know for a fact that a year ago, I would have told myself, "Just run 10 min. If you don't feel better turnaround and go home." Sometimes I did.

The other day, I wasn't going to let that happen. I didn't care how fast or slow I ran. I didn't care that it felt like it took everything in me to lift my legs at every step.

I was going to finish the run: Whatever it took.

Who cares if that was a mantra with a different coach? It's valid today more than it ever has been.

Although that chapter has been closed, I think the feelings and drive that I had then....they are stronger now.

Maybe I don't have to get rid of everything?

There was a lot of good there.

Maybe I could just keep that one little mantra...

Maybe starting with a clean slate doesn't mean forgetting, maybe it means that there's a healthy way to use the past to drive me to even bigger goals this year.
Rambled on by Tea at 3/07/2014 08:53:00 PM