Besides Mr. Tea and Coach Liz, there were only two people who knew I was racing.

I was intentionally/unintentionally quiet about the race. I had some personal issues I needed to work out for this race. Sometimes, it's best to do that on the DL. I didn't want the distractions that go along with posting about a race. I really love all the support I get. Sometimes I just need to go inside and work out my shit.

There were several things that I wanted to work through before Nationals. I'd only had one race this year, and it was a 70.3. I needed a short race to practice the whole moving fast thing.

Immediately after that, USAT stepped up and gave the qualifying slots to TriBoulder. I was already registered for the race. I was already going to Nationals. I was looking forward to a nice low key race to practice my stuff.

TriBoulder was not an A race. In fact, the race was the culmination of a pretty good sprint build up. I knew that I wasn't going to feel fresh. But hell, I never feel fresh during training. I was going to give it everything I had.

That morning, I felt GREAT. I felt strong. Maybe it was because I was racing a sprint. It's an amazing distance.

BUT, I was nervous AF. I'm not kidding. I had a laundry list of things I wanted to accomplish. I couldn't bear it to let myself down. For some reason, deep down inside, I knew today was going to be a great day.

When I got to the race site and started unpacking my transition, I realized that this nice little low key race.....was not really going to be that way. The women who are in the top of my age group in the state were here to race. Seven of the women in my age group had already qualified.

In other words, I had no plans or expectations to podium today. It's never on my mind. It's never a goal of mine. I was planning on using these women to help me achieve my goals. I was going to hang with them as long as I could.

I've mentioned this before, but it is worth mentioning again. These women are not just amazing athletes, they are incredible people. We had a fantastic time race morning. We're (once again) the last wave, so we had plenty of time to talk.

Finally, it's GO TIME. As soon as the RD started the 5-4-3-2-1, the nerves left me. I lined up at the front and took off running into the water.

For open water swimming, most people take off like a bat out of hell. I've learned that patience is best. Let them take off; I'll do my thing, and they'll fade.

The sun was particularly bad. NO ONE could see the buoys; not even with the best of the best ROKA goggles. From the beach, I had gotten a good visual of where the buoys were. I have a really good internal gps.

When I saw the group veer off the right, I was debating. Am I on the right course? I'm almost positive they are going off course.

The next thing I know, I'm alone. the group took off to the right.

Out of nowhere a boat speeds in front of me. I hear them yelling at the crowd, "SWIMMERS GO LEFT."

I'm on the right course. I glance up, I realize I'm very close to the first buoy. I've caught the previous wave.....and I'm the only woman in my age group.

At the second buoy (the turn point), I turn on the speed. I look up, and I see a woman in front of me with the same color swim cap. I look around. We're alone. I don't know if she is in my ag or older. I decide to catch her.

I didn't catch her.

I had decided to race this race without my Garmin. I had it with me, but I didn't look at it. I hit the lap button when I finished my swim.

It ended up being a slow sprint swim for me. It was a pace slower than my half ironman in June. So. Probably a good thing that I didn't know what my pace was.

I hit the beach and started running up the hill with everything I had.

I thought for a second......all of the women are still in the water.

I grabbed my bike and head out.

The bike was pretty uneventful, which is always good. The first 5 miles of the course is uphill. I killed it. I had my fastest 5 miles ever. If I didn't catch you on the swim, I most definitely did on the bike. I really didn't know where I was in my age group, but every guy I passed yelled at me, "GO GO GO!!!"

I really wanted to ask if they've seen anyone else in my age group, but it's hard to have conversations when you're riding 26mph.

I never saw another woman in my age group. I flew into the dismount area (27mph thankyewverymuch) and took off running with my bike.

I got to the rack. EVERY bike rack was empty....except one. There was one bike already racked. DAMMIT, she's so fucking fast. (I found out later that we had the exact same bike time.)

I'm pretty sure I'm in 2nd at this point. But you never truly know because sometimes people set up at the wrong bike rack. You just never know.

THIS was the #1 thing I wanted to accomplish today.

I have always hidden behind my bike speed.

It's really easy to do that. Have a great bike; then tell myself, "I'm not really a runner, so just do your best."  My *best* never was. It was always me "giving up". I was using the excuse of "not being a runner" as an excuse for not giving it my all.

I didn't want to disappoint myself. I took off running as hard as I could. I didn't look at my garmin. Of course, I wasn't perfect. There were times, I realized that I was spacing out. I would snap out of it and say, "WHAT ARE YOU DOING! THERE'S NO TIME FOR SPACING OUT."  I re-grouped immediately.

On the course, I don't see any women coming at me. As I'm approaching the turnaround, I see Courtney (1st place). She's about 2 minutes ahead me. I don't see another woman. I do the math in my head. Courtney beat me out of the water by seconds. We were probably very similar on the bike. There can't be anyone else between us.

I hit the turnaround. I start to see the first women I've seen. ANY one of them could be 3rd place.

With one mile left and one hill left, I start running. I don't know where 3rd is, but if she was going to beat me.....I was going to make her work for it. To beat me, she is going to have to run a PR.

I went tearing through the finish line at full speed. Courtney caught me at the end. She yelled, "WE DID IT!"

She showed me her finisher's ticket. She was 1st. We rushed over to find out if I was second. 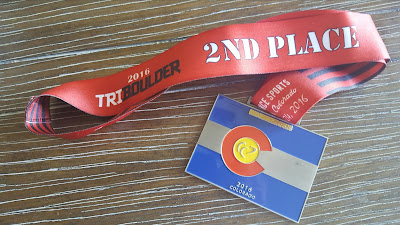 Even though this was not my A race, this race was the biggest emotional win, I've ever had.

For years, I'd been criticized and mocked about my run speeds. It didn't matter how fast I swam. It didn't matter what my power output was on the bike. For some reason, MY run....MINE....really had a lot of people concerned. That got into my head.

Triathletes that come from a running background will always believe that the fastest runner will win.

Yesterday, I was 2nd on the swim; tied for first on the bike; and 5th on the run.

The fastest runner came in 4th.

My win (yesterday) was that I finally let go of the past. I stopped hiding behind my bike speed. I stopped thinking about myself as "not a runner".