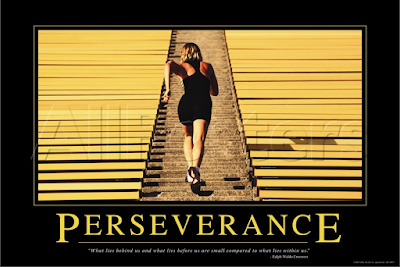 I needed 24 hours to figure out what happened because when I got home I was in really bad shape.

Sometimes you can't always figure out what went wrong....sometimes you just KNOW something is wrong and no matter what you do....you can't fix it on race day.

That's what happened to me.

Ultimately what happened was that I didn't eat enough on Saturday. I think most of you know that we are going through a pretty big remodeling at our house. Mr. Tea and I spent the day out and about picking out fixtures, furniture, etc.

Granted I ate, enough for a regular person, but this gal....I have an appetite.

This swim was *ok*, but not up to my normal sprint swim.  I might have been starting to feel some of my issues here, without realizing it.

I believe I was 3rd on the swim but don't quote me on that. I only glanced at the full results for a few minutes.

Then BAM, I felt like I ran into a brick wall. All of a sudden, my power is dropping.

As early as about 3 miles, I realized that I was losing focus and starting to feel tired. My mind kept telling me to push, but I just couldn't. Again, I couldn't get to that next gear.

After 5 miles, my power was dropping. The only reason I was able to keep up my speed is because the course is very fast, rolling hills.

The bike and swim are my strengths. When it comes to those two event, I am always confident that I will be either 1st or 2nd on the swim and 1st on the bike.

I got passed twice by women in my AG on the bike. If I didn't know I had a problem before then, I sure did figure it out when I got passed.

Normally, on the bike, I start picking off people. I look ahead and say, "I'm going to catch that person." I didn't have that motivation at all today. A guy passed me at one point, I was determined to stay with him. I did. Toward the end, I ended up passing him. Still, my power was low.

With the HUGE gains I've made on the bike since working with Liz, this really frustrated me. I had the fitness for a 44 minute 17 mile ride. But, I couldn't even get close.

I get to the run. I grabbed two cups of water. They have nuun on the course, but I don't tolerate nuun....besides....at this point, I'm thinking that I might need calories, and nuun doesn't have any.

Call me brilliant, but this was the first time I considered that I might have a fueling problem (from the day before). My racing fueling was normal, but I certainly didn't feel normal.

I started out really well, but I was tired. So tired. At .60 miles, I looked at my garmin and thought, "Half a mile? That's all I've done?"

The second mile has couple of steep but very short hills. The hills almost did me in today. Normally, they're tough (dirt road & out in the sun with no cover)....but they aren't ridiculous. Today, they felt ridiculous.

I kept focusing on form. I was thinking that this run is hard, but it will be harder if my form falls apart. My pace was dropping. The hill was one reason, but more importantly, I had a hard time maintaining a threshold heart rate.

The weather was beautiful. It wasn't hot. We finally had a break from the storms. The day was set up to be a PR day for me.

The end result is that I was 3 minutes slower than last year and didn't hit any of my goals. (The bike was 2 minutes slower. T1 was slower by 1 minute, but I'm ok with that). I should have planned better. The parking lot was wrecked and running was killing my feet. I was hopping from towel to towel (don't tell anyone). At the start, I had considered bringing my flip flops down to the water and decided against it. I should have brought them.

Things happen in a race. I blew a tire in Feb at the Desert Sprint and ended up in 8th. Sh*t happens.

But when some thing happens that I had full control over, that's a tough pill to take.


This wasn't an A race, and things like this are going to happen.

You can see in my placings how my energy decreased throughout the race. Running is my weakness, but I don't usually drop that much.

After finishing, I had to wait to get into transition. I was out of it. I found a grassy spot. Dropped down only to smell something. I sat down in a nice big pile of dog poop.

That's the ultimate analogy for triathlon. Be confident but keep your ego in check. No matter who you are or how fast you are....you'll always end up in some shit.

I would be thrilled with 7th place if I had given everything I could. It's incredibly frustrating knowing that my time from last year, would have put me on the podium again.

DID I HAVE FUN?

I've podiumed 2 out of 4 times so far this year and had fantastic PRs.

Sunday was completely on me. Those are the hardest ones to accept.

All things considered, coming in 7th after a bad day.....well, that's not really a bad day, right?

With all due respect, that's bullshit. That would have been true for me a few years ago, but I don't feel that way any more.

The bar has been raised. What I used to do isn't good enough any more.

This is what triathlon is about. If it were easy, everyone would do it. It doesn't matter if you're a sprinter, like me, or long course beast. What I love the most is that improvements are not linear. We can go for weeks or months without seeing improvements, then BAM BIG improvements. We're going to make mistakes.

We keep working because we know we can be better and stronger, but in order to get there we have to take some risks. When you take risks, there always the chance of not hitting our goals. We shake ourselves off and pick up where we left off.


Now, I'm on a rest and recovery day. Then, it's time to get ready for my next race in 4 weeks; because I have big goals to hit.

After that, I have a month off from racing to get ready for the BIG SHOW where I'll do competing at both the Olympic (on Saturday) and the Sprint (on Sunday).

Now, it's back to the GRIND....because these woman are fast, and I have work to do.