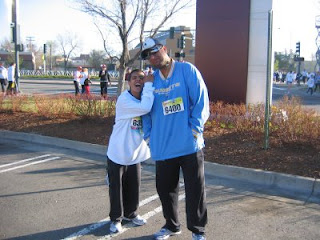 These pictures are in no particular order cuz I'm being lazy.

The morning started off great. I got up at 5am to get my own breakfast, feed dogs, visualize, and relax.

I was planning on making blueberry pancakes for everyone (Mike, Justin, and Thista) cuz I'm nice like that. 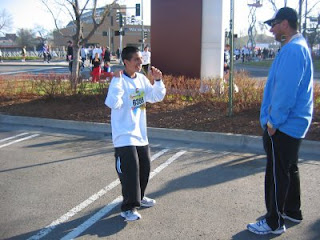 5k: Everyone (except Jordan who had a basketball game after the race).

Breakfast was alot of fun. Everyone talking over everyone. Justin is official photograher, just so you know. It seemed like everyone was really excited to run this race.

Yep....a race that I have run so many times that I've lost count, and I got completely lost....took a wrong turn, then another. Called Mike who was laughing 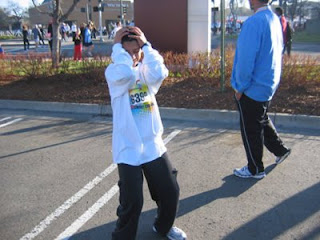 because he saw me heading the wrong direction.

My sense of direction lately.

We get to the race about 35-40 minutes early. We get primo parking.

In the parking lot, we (Justin and I) decide to get everyone warmed up with super cool dance moves, strange chicken-like-dance-high knee moves.

A good time was had by all.

With 7 minutes until start, we decide that it
would be appropriate to head to the start. 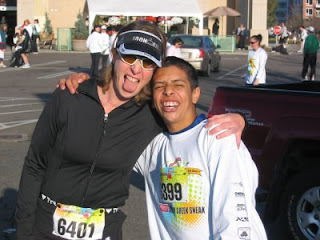 (That was Justin's idea. He's a smart one. I probably would have stayed in the parking lot dancing all day.)

(Oh....that's me in black. Justin in the white t-shirt, Mike in Blue and my Thista---who I made feel VERY tall indeed----see below).

I start visualizing the race course. I know where all the mile markers are. I know this race like I know my own backyard. 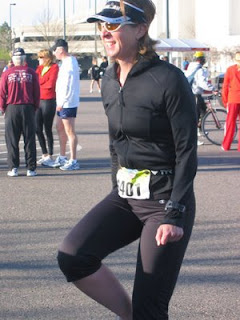 Just go, I think to myself. Whatever happens happens, but your goal is to feel wiped out at the finish. Whatever time that gives you is ok.

DO NOT SLOW DOWN.

DO NOT WALK BECAUSE IT HURTS.

We're off and running.


Later on, Justin told me that they saw me take off 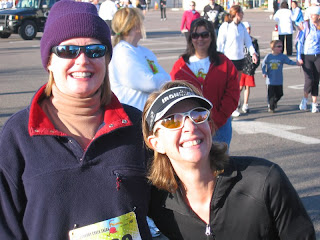 All I knew was that if it was going to hurt, I wanted it over with as soon as possible.

I started too fast by about :10 per mile, but I didn't slow down.

No guts no glory.

But, 3.1 miles feels really far when you're going really hard.

When I got to the second mile, I felt myself start to fade.

I yelled out loud. The woman next to me yells back, "I AM."

The last half a mile was a blur as I sprinted as hard as I could to the finish.

I nailed the time. I hit the EXACT time that I wanted to hit.

When I finished, I almost tumbled over, forgot to stop my garmin, so I didn't get my "real" time. But I knew that it would be huge.

I head out to get water, banana, and bagel. As soon as I got to the water station, I felt my legs tighten up. I was thinking "The 5mile is going to be tough."

I knew I had about 25 minutes before Mike would be finishing, so I walked around stretching out my legs and hydrating.

Then, I head over to the finish. Mike finished in roughly 47 minutes. Thista and Justin finished in 58:49.

Even though I PR'd, I think the best part was cheering everyone else in to the finish.

I met them at the end of the corral, told them where to get some snacks and then said, "I gotta get ready for my next race".

Mike and Justin needed to head home to get Jordan to his game.

Thista hung around for the post race party to watch me finish.

My inital strategy for the 5 mile race was "Grin and Bear it" cuz man I was getting sore. I considered doing a walk run. I kept bouncing around, stretching, doing what I could to stay warm.

I focused on the start sign. Immediately, I knew I was going to go for it again.

Easy for someone else to say. Harder to pull off.

Somehow, I managed to get pushed toward the front. I tried to make my way backward, but the road was packed.

Holy Shi-take mushrooms! We are RUNNING. I am SO not ready for this.

I find a woman who I think looks how I think I probably look from behind (aka: big a$$). I decide to follow her. She holds the most perfect pace the entire time. One that is hard on my legs; not hard from a heartrate position, but one that means I might very well PR again.

My butt is burning. No lie. I push the pain to the back of my thoughts. I just focus on her white shirt and bounding butt.

For a short while, we start to yo-yo. I get the feeling she didn't like that very much. C'est la vie. You no like? Then pass me.

Which is what she did.

With .75 miles left, I know that I can start to sprint. At this point, I am no longer thinking about the discomfort in my legs. I am only thinking about catching that woman. The one that did not stop for water at the last water station and put me behind about 20-30 meters.

AT .5 miles left, I knew I could take her. I was right behind her when I made my move. I relaxed for a second when I realized that she pulled right up next to me.

I went faster. At .25 miles left, I ran faster than I thought possible given my 5k PR a hour earlier.

"Learn from your elders" I said, and I took off. I was flying.

I crossed the finish line and I couldn't believe it. I came within a minute of another PR.

I saw Thista at the last second on the right hand side.

I grabbed my 2nd reusable shopping bag, water, two bananas, and I said, "We gotta get to the basketball game"

I think it took a little while for me to realize that the last time I pr'd in the 5k was over 6 years ago.

A race that I have never been able to run successfully until today. And, I'm telling ya, I feel it now.

In car on the way home, I drank my Odwalla chocolate protein shake....my favorite post race drink, and I felt good.