Race Report: How bad do you want it?

I know. I was all hush hush about my plan, but hey I warned you.

I really wished that I could write something funny and witty because the race was really great.....but

Instead, you'll get the condensed version.

Slow start. We could not see the buoys. I don't mean, "Hey, is that the buoy out there?" We couldn't see them on shore and being in the water was worse. There was no other pointers that we could use to see the last buoy.

The swim start was frantic. Aren't they all? The first thing I thought to myself was, "It would really be beneficial for people to practice running starts into the water. AND, if you are in the back, and you pass the very front swimmers, you're probably going out too fast."

After the crowd cleared, I found that I was neck in neck with another woman. It took me awhile to realize that she was using me as her guide. And funny enough, I was using her. Either way, neither of us could see. I had no idea where I was going. I couldn't see the swimmers ahead of me. I could barely make out kayakers.

I finally stopped and looked up at a kayaker. He said LEFT....you need to veer left. I yelled out Thanks. (You can see this on my map). I actually think I did MUCH better than I thought.  I thought I was zigzagging all over the place. I don't know why there is the weird pointy thing on the map. I'm pretty sure I swam pretty straight, but that could also be where I was avoiding the newbie sprinters.

When we reached the turn point, I felt good. I was ready to start getting faster. I looked ahead and didn't see anyone else with my swim cap, except the woman next to me.

As we made the turn, we had a short gap, then we ran into the slowest of the sprinters. Backstrokers, breaststrokers, etc. I got stuck right in the middle of a group (because I thought I could dart through the middle and stay my course), instead I got Malachi crunched. 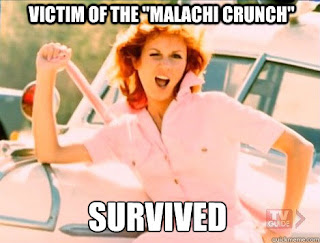 I saw the woman, now ahead of me.

I wasn't really focused on trying to beat her or anything like that. I liked having her nearby and wanted to stay with her.

I found out later that I couldn't see any other swimmers ahead of us because we were 1 and 2 out of the water.

I felt really good about my swim.

After thinking about it, though, I think I have to resigned myself to the possibility of no longer having swim PRs. It's not for a lack of effort. It's for the simple fact that I'm always in the last wave now. That means swimming through less experienced and slower swimmers.

If I can stay in the top 3 in AG, I'm pretty happy with that....whatever the end time ends up being.  I know I can swim that course in 1:20-1:23, but it's just too hard swimming through ALL the previous waves.

When I got out of the water, I felt like I gave the effort I needed. I feel really good about that.

My goal was to build the first 5 miles. I did that pretty well.

The website gave THREE different distances for this race. This is now the 3rd races that listed 3 different bike distances. HOW HARD CAN IT BE to get the correct distance? It's not a HUGE deal, but listing 24-27miles can affect fueling.  Here's the elevation profile.

And yeah, that downhill? Top speed 42mph. Probably would have been faster if it weren't for some of the turns.

All in all, I'm really happy with my ride. This is definitely a PR for me, averaging 20.1 mph on the bike.

The bike is quite perplexing to me. I keep my garmin on Lap NP.

NP (normalized power) is never even close to where I'm supposed to be. My understanding is that NP takes into account: climbs and coasting. It's a good measure of where I am for a segment.

I'm either WAY underperforming (VERY likely) or I don't understand how to use power in a race.

Things got a little weird here. Although I didn't know it at the time. My problem with running a 10K off the bike is that I start off WAY to fast.

My plan was to start slow....I mean really slow.....zone out everyone around me. Don't be concerned with what anyone else is doing....and run my pace.

I decided to be THAT dork and wear my fuel belt. It ended up being the best decision I made all day.
After taking in as much fluid and calories on my bike, I *thought* I was in good shape for the run. I had my gel right at the start with one flask.

Because this is a physically and mentally tough course, I broke it down into 2-2-2. The course used to be 2 loops of the 5k course. So, I knew that passing the 5k mid point was going to be mentally hard on me. Instead of focusing on the 1.55 point, I stared straight ahead, and kept repeating 2-2-2. Two miles at a time, and it'll be over quickly.

I met the coolest guy running. We talked and talked and talked, and he asked if I'd mind if we ran together. I certainly didn't. I could use the diversion. Even though, there were long gaps of silence, it was nice to have company. By the second mile, he said couldn't keep up and needed to walk. He knew I was chasing a PR, and said "I'll see you at the finish".

Things are going along pretty well, but I noticed that I was starting to get thirsty by the 2nd mile. Granted it's hot, but I JUST had 10oz of water at the start. I mean, really thirsty.

In addition, to my 30oz that I was carrying, I was throwing down 4 cups of water at every aid station. This has never happened before. I couldn't get enough cold water.

YES. It's hot. Yes. The sun is beating down on us. YES. The route is hilly. Yes, it's a dirt road. THAT'S HOW TRIATHLON IS. But....this was different. I couldn't even look at the reservoir. Thinking about ice cold water was too much for me.

I did ALL my normal stuff. Triathlon is always is the summer. It's always hot. My water plan is pretty solid.

During the race, I wasn't too concerned. I decided that I was going to drink as much as possible at every damn aid station. I did. It wasn't until I finished when I realized that I was super dehydrated.

Although, I adjusted my run plan downward, I felt really good about the way it went. Sometimes, the wins are mental more than anything.

Normally, when I finish a race (especially an oly), I'm running to the porta potty.

Today, I asked the volunteers for extra water bottles. I drank them down faster than a college student doing a chaser. I didn't pee for a total of 4 hours. I've looked at it from every angle. I can only say that it was just one of those days.

My plan was to intentionally run slow. I most certainly did that; except that I went even slower.

Why was my plan to intentionally run slow? It's complicated. My problem is my focus. When I race, I think about everything else except what I should be doing. I think about the other women. I think about getting passed or passing others. That causes me to lose focus and run off my plan. My thinking for this race was, "Today, you're going to have to be ok with getting passed."

The plan worked. This race wasn't about podiums, placings or pacings. It was about race strategy.