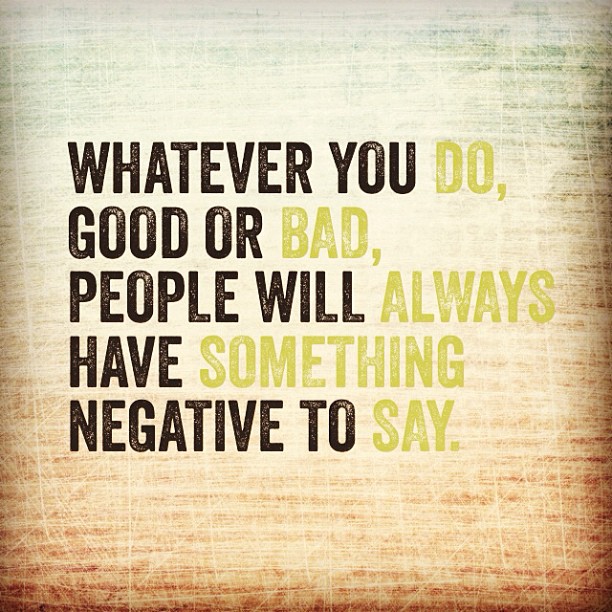 I have some negative athletes in my life right now. The problem with negative people is that even if they are just 1 or 2 people, they make if feel like 20 or 30 people.

They constantly complain about how hard training (for a 70.3 or IM) is. They keep warning me that this is no joke.

They are trying to ruin my experience under the guise of being helpful.

At first, I was trying to block them out. That really doesn't work for me.

On my run today, I started thinking.

So, this race will be worse than:

1.) My first HIM when on the run course, a thunderstorm with hail moved in, and the tornado sirens went off. I had to take cover in a porta potty along with volunteers until the worst of it passed. Then, I continued running getting pelted with hail.

2.) It'll be worse than an olympic race that I did in 107 degree heat last year.

3.) It'll be worse than last year when I did Tour of the Moon on Saturday and Desert Edge on Sunday. Sat I was on my bike climbing mountains in 20 degrees. Sunday, I got out of the water and onto my bike when it was 30 degrees, and rode and ran one of the hilliest tri's on record.

4.) It'll be worse than (again last year) when I race Rocky Mountain Oly, and I had a 20 mile bike into a headwind in the mountains in yet another hail storm. My glasses, my bike, and I were completely covered with dirt and grime from the highway.

5.) It'll be worse than in 2013 when I ran a 10K in a blizzard with 50mph winds and snow accumulating faster than I could take steps and only 20 of us showed up to race that day. (I had to drive closed streets in order to get home).

6.) Training will be worse than when Mr. Tea had to pick me up when I was training for my last marathon, and I was in pain from piriformis pinching my sciatic nerve. He found me laying on the side of the road because I couldn't even move from pain.

Here's the difference between me and all these negative people. I did these races. I never complained. I never cursed. Although, I did raise my fist to the sky and yell, "ARE YOU KIDDING ME?" on more than one occasion.

But I don't think about how hard all that stuff is....because those are just diversions from the task at hand.

And you know what? I did them all. I never felt a smug satisfaction because I raced in a such bad conditions. I felt satisfied because I completed something that I had worked for.

This year isn't going to be any different.