The up and coming

I have had insomnia for over a week. For the last two days, sleep has been better. Still, it takes a long time to recover from that.

Why am I telling you this? Because I get cranky, emotional, irrational, fill in the blanks, when I'm tired.

That's the reason I haven't written in a bit. I don't really want to sound sad or down, or super negative.

It is what it is, though.

Take my lack of enthusiasm with a grain of salt.

I have gone back and forth with how much I say about my upcoming race schedule.

I don't really want to hide it because it puts my training into perspective.

I am racing this weekend. This will be my 4th tri of the year. It's sprint with a long bike, which is shall I say....right in my wheelhouse.

It's my last race before my A races.

I'm going back to Nationals and racing back to back days. Nationals consists of an Olympic distance race on Saturday and a sprint on Sunday.

You might remember that I qualified for Team USA at the sprint distance. I have a pipe dream to do it at the Olympic.

To make that happen, I pretty much have to run my absolute best race at paces and speeds that I've never done before.

I'm working my ass off to do exactly that, but I'm not holding my breath.

Still, anything can happen on race day.

A few months back, I started thinking about next year (2018). Part of this came out of the fact that USA-Triathlon announced that Nationals would be held in Cleveland, OH in 2018.

I have no desire to race in Cleveland. There's nothing wrong with Cleveland. (I've never even been there).

If left me with this: it's unlikely that I will make Team USA.
OK, how about I say this. It's improbable but not impossible.

If I don't race the world championship AND I don't want to do Nationals next year....WHAT DO I DO?

Mr. Tea to the rescue.

This would be a celebration of how far I'd come.

BRILLIANT. I loved the idea, but CDA is in June.

June is cutting it too close to race the world championship to my absolute BEST.

I liked the idea of the 70.3.  After IM Boulder 70.3 last year, I'd wanted another shot. I did Boulder 8 weeks after surgery. I lost my fuel on the bike. I had a monster PR, but I knew I wasn't at my best. I can only do so much after being unable to train for 3 weeks.

I definitely wanted another shot at the 70.3.

What about May? St. GEORGE. YES. I LOVED racing the olympic distance there this year.

And, I'm particularly good at climbing on the bike.

Something didn't quite feel right about the race. I found out that a large group of people from CO were going to be racing there. This will sound strange, but I prefer to race where I don't know people.

I put THAT race on the back burner.

I have time to figure it out.

I started thinking about Choo. Bleh. A good race for my strengths, but I didn't really want to go to Tennessee. (Again, nothing wrong with Tennessee).

I got an email (last week) from Ironman. Because Multisport Mastery is a club team, we get priority slots in registrations.

The email stated that I could register for IM Florida 70.3 (Haines City) between 7/13-7/17 before registration opens to the public.

Holy cow. Florida wasn't even on the radar.

IF that slim chance, of making Team USA, actually happens.....this gives me time to train appropriately for an olympic distance race.

I checked out the course. The description was moderately hilly. I looked it up on map my ride and Strava. I uploaded the course to Best Bike Split.

Moderately hill: 2-3 hills at 5%. The rest of the ride is a rolling course.

It'll likely be a non-wetsuit swim. (Although, in 2016, it was wetsuit legal). Non-wetsuit? PERFECT. 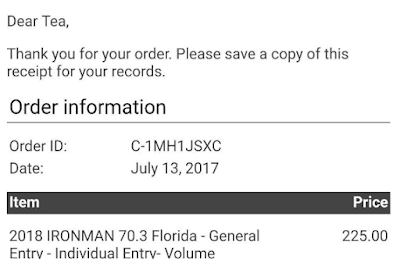