"You about to see something, you ain't never seen before!"

Halfway through the movie, Mr. Tea says, "You're Secretariat. The harder Liz pushes you, the better athlete you are. You never complain. In fact, you crave it. You want it. You are stronger than I've ever seen you. No matter what she puts in front of you, you give it everything. You are secretariat."

I don't seek out compliments. My goal isn't to inspire others. My goal is simple. Do you best every damn day. When he made that comparison, I was touched.

I stood there and thought about what I was going to do. In the past, I'd be nervous. Today, I was calm. I was prepared. Liz and I had several meetings about my race strategy. Dina and I had several conversations about my fueling. I knew I had put everything into training. It was tough. It was the hardest training I'd been through.

My goals had nothing to do with times. Although Boulder was an A race, I'm short course person at heart. The sprint is my best distance, and I love the way the oly challenges me. I decided to do Boulder for a different type of challenge. I like to mix in the 70.3 every few years. Boulder was my 4th 70.3 in 12 years and my first Ironman race.

I have always said that the only thing you can control on race day is your attitude. As a good friend said, "Pain is pain. Suffering is a choice". Yesterday, I proved it. From having to stop my race because of a cyclist that was hit by a car to losing my fuel to having a mechanical (minor) issue, I was never once frazzled. I was in control of the entire day. The result was a 23 minute 70.3 PR. I ran. I ran more than I ever have during a HIM; once again, facing challenge after challenge. I was 20th on the swim; 20th on the bike; 37th age group. It was unreal when I saw the results. I never focus on placings and podiums. In Boulder the competition is so tough. The day before, I said to Mr. Tea, "Don't worry about where I am. It doesn't matter. I won't even be top 20 at Boulder. I rarely do 70.3's. And these women are fast. Really fast. It'll be amazing if I'm even in the top 50."

I think in every long race, we all hit dark moments. Liz dragged me through more than a few dark moments in training. She trained me for these moments. In training, I had to figure out how to recover and move on. I had to face my own demons and insecurities.

I know some of you remember my breakdown a few weeks ago. I had a long run. Halfway through the long run, I did hill repeats. I did a moderate run; then, I ran mile repeats ending faster than HM pace. That was all in one 2 hour run. I broke down after the hill repeats. I had to make a decision, "Do I continue? No one would know if I stopped. No one would even care. But I would."

I continued on to run my fastest ever mile repeats. I cried in the car on the way home.

I wrote about the whole thing. All of you were there and were encouraging. You showed me how important YOU are.

On Sat, I started thinking, "I don't think I have anything left."


And I thought of all of you. I thought about the workouts that I thought I couldn't get through but did. I remembered the pain I went through. 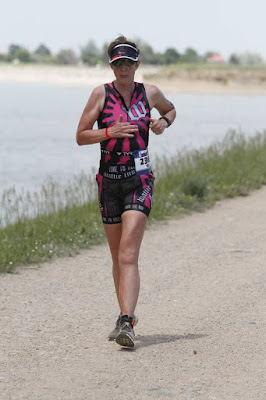 All I had to do was run. It didn't matter how fast. In fact, I was so focused on my plan that I didn't have "time" set up on my Garmin. I had no idea what my race time was. I was racing blind. 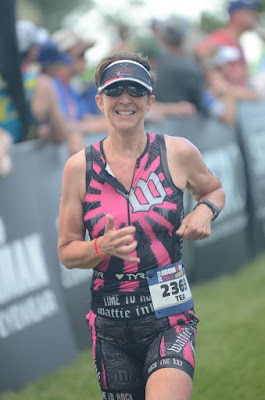 
When I crossed the finish line, I head back to transition. I turned on my phone. My phone was blowing up with messages. I spent at least 20 minutes trying to read all the texts and facebook messages.

I didn't have any idea what I accomplished until I saw your messages. At a distance that I thought I couldn't even compete.....I was 20th on the swim and bike and 37th in my age group at the finish.

It was an amazing day.