Race Report: How the surgery went down

I woke up at 5am the day of my surgery. I wanted to go back to sleep, but I was hungry. (I always wake up hungry). Then, I remembered.
Dinner was the last real food I could eat. I was allowed to drink clear liquids....until 8am.....or wait, was it clear liquids? Was it just liquids in general?

Clearly, I can have coffee, right?

And a smoothie? Not like a thick smoothie but a bunch of my fresh fruit juiced up and mixed together.

That counts as clear liquids....doesn't it? Shit. I can't remember. I pull out my pre-op instructions. Yeah, like I can read the doctor's handwriting.

I'm having coffee and my smoothie. That's settled.

We have to leave for the hospital at 11:30am. It was early. With the storm coming in, we figured that we'd be better off leaving early.

This was going to be my first surgery. I haven't been in the hospital for over 20 years, and the last time was to have JMan & Googs.

I was worried about waking up during the surgery.

The head nurse came into my room and introduced everyone. The entire team was absolutely amazing.

Then my surgeon came in.

Later in the day, Mr. Tea asked if I remembered cracking jokes and making the everyone laugh. 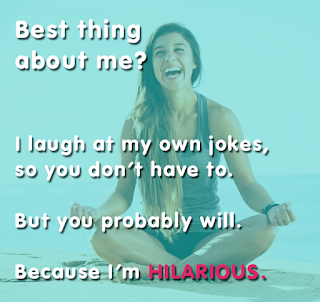 Of course, I do. I'm hilarious.

Head nurse came back and said, "We're going to give you an amazing cocktail that will give you the same feeling as 3 margaritas. It's meant to relax you before surgery."

Me: WAIT. 3 margaritas? I don't drink. Do you know what that will do to.....zzzzzzzz

The last thing I remember was an oxygen mask being put over my face.

Me incoherently mumbling, "Was he on a bike?"

I slowly open my eyes.

I must be done. I didn't wake up during surgery!

She tells me that before I can leave, I have to pee. I tell her, "in that case, bring me water. I can down more water than anyone."

A few minutes later, I was standing up to head on over to the wc.

My hospital gown flies open in the back. Mr. Tea is scrambling to cover me up.  I tell him, "Don't worry about it. It's a show most people would want to see."

I put my regular clothes back on. I look down at the incision site. I'm shocked. The incision is inside my belly button. There won't even be a visible scar once I'm healed?

WHAT?! No war wound? Nothing I can brag about? That's not much fun. Now what am I going to talk about at parties?


You're probably wondering about pain. I'm still under the influence of a local anesthesia and sedation. Although, I feel great. The grogginess is all gone, but I know that sedation takes awhile.....I learned it from House years ago.

My surgeon told me that the first night I will want to take the Oxycodone prescription. After that, do everything I can to avoid taking it. He told me to do what I can to manage pain with over the counter medicines.

I don't like prescription medication. I even like narcotics less. My goal was to have the local wear off and see what the pain level was like. I wasn't planning on being a hero, but if I could manage it without narcotics....you bet I'm going to.

Hours later at home, I start getting a headache. I get headaches rarely. I decide to wait it out. I eat more food. (Not a lot but enough that would allow me to figure out if the headache was a hunger headache).

The food didn't help. Now the headache is getting uncomfortable. I decide that it is the sedation medication starting to wear off. I'm the best at making up stories to fit my life.

I take Tylenol. Unfortunately, this is going to delay feeling pain at the surgical site. The headache is really kind of uncomfortable.

30 minutes later, the headache is gone.

From Dr. Google, I find out that local anesthesia can take 4-6 hours to wear off. By the time I hit 6 hours, I'll be in bed.


The night was pretty uneventful except for one instance.

I didn't know what time it was. I didn't want to take Tylenol because I had already taken it, and the last thing I want is to od on Tylenol.  I had brought the Oxycodone to my room just in case.

I laid there and allowed myself to feel the pain, to really feel the pain. I think I can manage this. Just then, Mr. Tea walked in. I asked him if he could get me some Aleve.

My plan was to give the Aleve 20-30 minutes to start working. If it didn't work, I would take the Oxycodone.

I decided to try meditation. It's been years since I've meditated for any real period of time. However, I had a very serious meditation regime for a long time.

I laid on my back. I focused on the pain. I cleared my head of all thoughts and allowed the pain to wash over me. I started to see the pain grow and start to dissipate.

The next thing I know, there is light coming in through my window. It's 7am. I slept straight through for 8 hours without the help of oxycodone.

Here's the real crazy thing. I woke up and didn't feel any pain. I thought getting out of bed would be bad, but it wasn't at all.

Once I started moving around, I started feeling....discomfort....more than I had yesterday but absolutely not debilitating and definitely manageable. I decided to take Tylenol. A short while later, I wasn't feeling any discomfort other than the bloating and slight twinges when I bend over.

My surgeon had told me that I'd need to push myself up out of chairs (with my hands on my legs). I haven't had to do that.

I do not feel 100%, but I also don't feel anywhere NEAR as bad as I thought I would. I can walk, go up and downstairs, I can pick up things; I can twist and turn.

The biggest issue I am dealing with, right now, not even 24 hours after surgery is the bloating. I usually have defined ab muscles. You can't see my abs at all. In fact, I look like I am about 12 weeks pregnant. That makes bending over difficult but not painful. I took a picture, but I don't think I'll post it. I'm not really a fan of of injury pictures.

I, also, now have a small purple bruise right below my belly button.

So far, I can say this has been pretty uneventful.

For those of you who are interested in the specific recommendations from my surgeon, I am going to write about what I did leading up to surgery and post surgery. I was unable to find that information when I was trying to find firsthand experiences.

It just might help someone else getting ready to go through umbilical hernia surgery, especially, those of you who are athletes.
Rambled on by Tea at 3/18/2016 10:32:00 AM