"When it's your time, YOU WILL SHINE."

Two days ago, I didn't think I'd be racing Nationals. Mr. Tea had a major health scare that turned into a minor one. Minor in comparison to what we originally thought. He was unable to exercise; unable to travel and was on medications. It left me and emotional mess and exhausted.

Now, I'm sitting at the awards ceremony, blinking back tears. I was finally able to release the emotion of the week and the race.

I officially lost it.

I arrived in Omaha late Friday night. I was an empty shell.

On Saturday, my goal was to shake off the week. Get to the race site, fully immerse myself in triathlon. On a normal basis, I don't like being around triathletes or talking about it.....I prefer to separate myself from the sport.

For some people, triathlon is a lifestyle.

The difference is subtle but important, and it starts with an attitude toward a sport that can fully encompass someone.

On Saturday, triathlon was my saving grace. I watched the swim starts. I cheered on the multitude on Multisport Mastery athletes. I so badly needed to clear my head and focus on my race.

As the day went on, I started thinking, "I'm going to have a great day."

I repeated that all day long.

On race morning, I sat on the deck waiting for the signal to jump in the water. I stared at the yellow turn buoy. "It's just me and the buoy."

Because there was a long gap between the previous swim wave and mine, we had plenty of time to talk before the swim. But I had checked out mentally, my mind kept playing the record, "It's just me."

And it was just me and the buoy. I've never been in the zone before, not like this. I just swam.

I got out of the water. I didn't think. I sprinted up the hill and into transition. 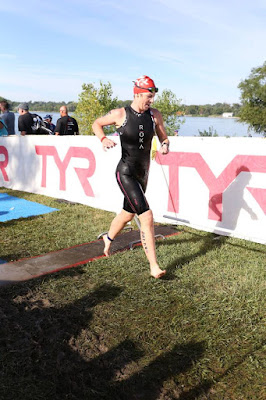 I grabbed Black Betty, and we took off running.

On the bike, it was all me. I only used my garmin to keep me honest. (For those of you who are numbers people. I averaged 21.8 mph the first half of the bike. For the entire bike, I averaged 22.5mph and an NP of 178....or 20 watts below my FTP. My best effort to date. MY BEST.) I didn't back down on the hills. No holding back. I blasted up hills at over 300 watts. THANK YOU Coach Liz for all those 500 watt intervals that made this quite bearable. I flew down the back side. I went from 22nd place to 12th place just on the bike.

At the turn around a guy said to me, "That's some suffering."

As I passed him, I thought, "Pain yes. Suffering. No. Pain is pain. Suffering is a choice."

My legs were burning. My breathing labored. I was grunting and growling. I had sweat running down my forehead into my eyes and down my nose. My hands were sweaty.

But, I didn't think of all that.

It was just me and Black Betty doing what we do best. 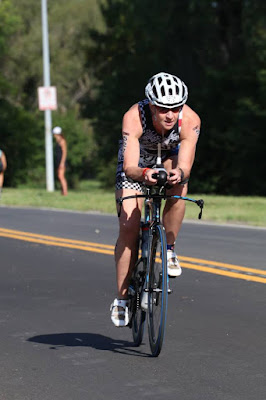 With 2 miles left, I saw two women. They were both in my ag and wearing TEAM USA kits.

At THAT moment, I had one goal. No matter how much it hurt. No matter what my watts went to....I WAS GOING TO PASS THEM.

The race was on. I blew past the first.

I blew past the second.

I knew they would catch me on the run.

But for that ONE moment. I realized that I could compete at this level.

I hit the dismount and took off running as fast as I could. I was sprinting with my bike, knowing Team USA was probably 1 or 2 minutes behind me.

Racked my bike. Had problems getting my shoes on.

I took off RUNNING. 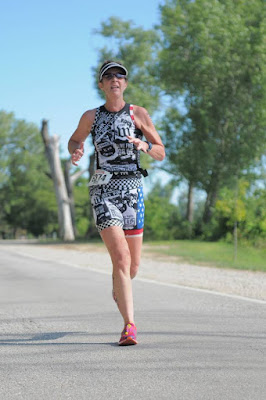 Then, for the last half mile....something amazing happened. A woman who had been on my shoulder the entire time started picking up the pace. She passed me.

I think I might have said that out loud.

I started running. I started sprinting. I thought for sure I saw death looking me in the eye.

I wasn't going to give up. I started going harder. She ran harder. OH GOD I HAVE TO HOLD ON.

Running harder than I ever thought possible. We crossed the finish line and collapsed. 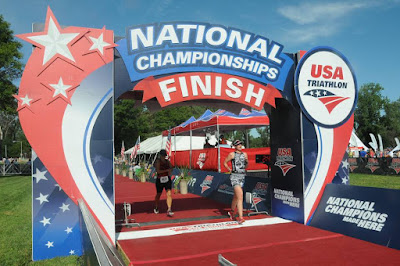 I wrote about times and power and paces in this post.

But I didn't know ANY of this during the race.

The woman "catcher" at the finish line, held me up. She yelled at someone to get me ice and a towel. Someone else gave me a bottle of water. Another person put a medal around my neck.

Once recovered, I went over to check the results. I was 27th. Last year, I was 72nd. I never even checked my paces or times.

I went over to get my gear bags and turned on the phone.

I had messages from Liz and Mr. Tea. I broke down. Liz was genuinely happy for me. She had 10 athletes who had podiumed or made Team USA.....and here she was SCREAMING AT ME via TEXT. I've never seen her so excited.

That's when she said, "TEA. YOU NEED TO GET TO THE AWARDS CEREMONY. YOU HAVE A SHOT AT TEAM USA."

I was in disbelief.

With roll down, I could make TEAM USA.

From there it was a mad scramble. I had to get packed at my hotel. I left my bike at the race site and jumped on the shuttle. I showered, packed and had to be out of there at noon. I left the hotel at 11:55.

I drove back to the site, packed up and had to be at the convention center at 1pm.

I walked into the meeting room at 1pm....only to find out that I won't know for at least a week and possibly until the draft legal sprint races in a couple of months.

Only then did I find out that I PRd in every way possible.

After the drive home....and feeling like I was hauling ass all day long, it's starting to hit me. I'm only now processing what I accomplished.

When I started with Liz, I put myself on a 5 year plan to get to Nationals.

My first Nationals race was 2015. After that,  I put myself on a 5 year plan to make TEAM USA. I just missed that THIS year....one year later.

We have a plan for the next two years.