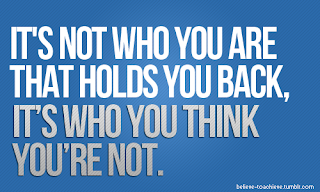 I have read a bunch of articles lately around the topic of confidence. I could write an entire post on the topic. Instead, I'm going to tell you two quick stories and let you read the articles yourself; if you are so inclined.

I read blogs. I really enjoy reading blogs from coaches. One Coach in particular had been writing about how he is "slow, fat and old"....over and over. Several of his posts mentioned how GREAT he used to be. I'm sure this coach wouldn't tolerate this type of language from his athletes, but it seemed to be ok in talking about himself. We say things to ourselves that we would NEVER say to other people. 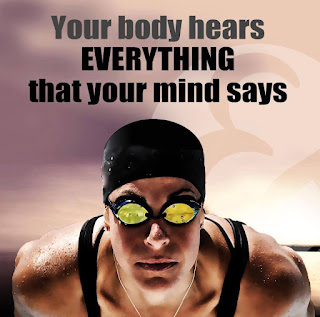 Then, AWESOME happened. He claimed it was his "never give up" attitude (or some such thing), but I saw it differently. He packed away his triathlon gear and was giving up the sport. Shortly thereafter, he did a race....and WON....for the first time ever.

He did, indeed, give up. He gave up all the negative thoughts that were affecting his performance.

Do you see what happened? He finally let go of who he used to be. He freed himself from all those negative thoughts. All that noise in his head.....was gone....he was freed up to be the great triathlete he could be. When we release the clutter in our heads, we can be great.

Remember Katie? She has some open water issues that she is working on going into her first IM. I don't like to give advice to people. I've learned that (for the most part) people don't want your advice. So when Katie messaged me asking for help, I was hesitant. There was something in her message that made me think she really wanted advice.

I told her, "Everyone is different. This is my "pre-open-water-swim" routine." I explained why I did it. My process is very different from most people's approach. It's a very calming strategy.

Today, I got a text message from Katie saying that she did what I do, and she had her first ever successful open water swim. I can't even begin to tell you how happy I am for her.

The point of my own strategy is to relax and not think about swimming. I've talked about this over and over.

When we free our minds, we give ourselves the chance to be great. Do. Don't think.

Along those lines, Coach Liz recently sent out a few short articles about confidence and mental toughness. You can also get the awesome information that she sends out by following her on Twitter. When you read the articles, you'll realize that success doesn't breed confidence. Success is external. Confidence is internal. This goes far beyond sports. The people with the greatest confidence are confident because they are internally accepting of themselves; the good and the bad.

The articles are timely for me because of my rough week last week. Without further ado, I present you some good reading.


This one is my favorite; from the author of StillPower. Confidence

Mental Toughness is the key to Carli Lloyds' success.

For those of you who enjoy Coach Liz's blogposts, she has a new one. Although she covers quite a bit in this post, I was most interested in her approach to coaching athletes without using data....instead....putting a challenge in front of them to see how they respond.  (How many times have I talked about her "challenge" workouts?)
Rambled on by Tea at 7/09/2015 02:20:00 PM