Tour of the Moon Report

I don't even know where to start this report. There were so many fun little things that happened in no particular order.

I'll keep this quick. Tour of the Moon is not a race; it's a tour. There's no timing. You just ride.

Originally, the plan for the Tour was a 60ish and a 40ish ride. Because this is through a national monument both courses were changed, and my 40ish became 30ish.

I was very happy about this. While other people in my group were trying to convince me to do the 60ish, I was *thrilled* that I was only going to ride 30. I'd been really sore since Thursday and didn't really know how I was going to do.

The next thing that happened. We had a cold front move in that brought snow and sleet and different things depending on where you were in Colorado. Because of this, I opted to bring only one bike. I could have made two work, but I just didn't want to deal with it. I knew the Tour could be difficult on a TT, but I thought, "What the hell? It's challenge weekend. I can go super slow if I need to".

On Friday, I get checked into the hotel. For the price I paid, this hotel was unbelievably nice. I still can't believe how cheap it was. The thing I like the most is that they had a kitchen and started serving a HOT, sit down breakfast at 6am. So many times I've gone to races and had to bring my own food because 1.) They have a crap continental breakfast. or 2.) They don't open until after the race starts.

I got unpacked and worked that afternoon. I was really tired from the drive. I had dinner plans that night that I was going to cancel, but then I thought that it would probably be good for me to get out and take a break.

I had the pleasure of having dinner that night with Coach Mike and 2 of his friends. One of the guys reminded me so much of one of my sons. I was trying not to stare at him. Physically, he didn't look like him, but it was his mannerisms. I wanted to take him home and tuck him into bed. But, he's in his 20's, and that probably would have been weird.

Saturday morning is SO COLD. I layered up. My roomie and I had our nice hot breakfast, and we head out.

I was meeting up with a group of people and with Coach Mike for the ride. We were supposed to start at 8am. Due to some unforeseen circumstances, they were unable to start at 8am, so Mike and I took off.

BONUS #3: Hanging out with Mike for a few hours

I'd looked at the map. It looked like we had anywhere from 10-15 miles of climbing. You know how maps are.

Knowing it's coming, but not knowing HOW BIG THE CLIMBS are......well.....ignorance is bliss.

Remember this: I haven't done any climbing. The rides that I have done were on my road bike.

In a nutshell, there was a lot of grunting. Believe it or not, I don't believe I cursed once. That's only because I couldn't curse. I could only grunt.

Meanwhile, Mike is holding full conversations, while we're moving at 6mph up this ridiculous mountain.

And trying not to laugh at Mike's horrible Rocky Balboa impersonations. (Yea. Mike. You need to work on it. Aren't you Italian? Shouldn't that be...like....natural?)

Mike rides up ahead to leave me with the few other people who are grunting and moaning and.....STOPPING....yes. People were stopping to walk.

I didn't. I wished like hell that I had a 3rd chainring, but I never stopped (except to take off and put back on layers). I never walked. My legs felt like they were going to explode.

BONUS #4: Doing something I didn't think I could 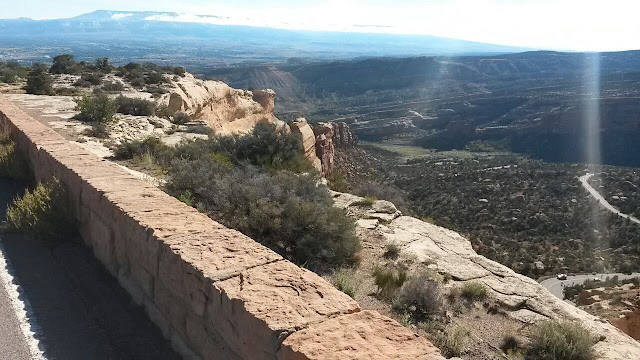 I took this picture from the top. I wish I'd gotten a better picture of the road to give you an idea of how steep is was going up and down. 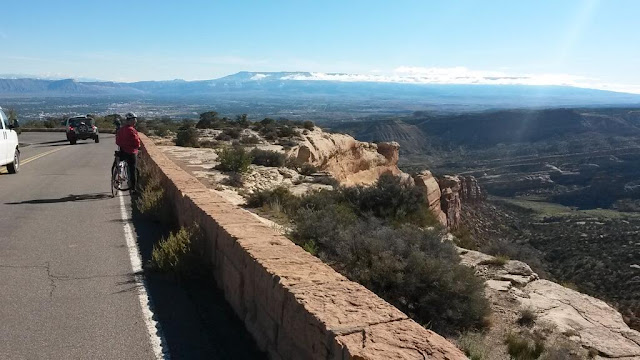 Then we had to go back down. The downhills scared the hell out of me. Steep, hairpin curves...oh and you're looking over a mutha f*ckin CLIFF. Hey, no big deal FOR EVERYONE ELSE. Big freaking deal for me. I did what I could....road my brake....the entire time.

We get to basically the bottom, and Mike has to leave for the 60ish. Meanwhile, I'm SO HAPPY that I'm only doing 30ish.

BONUS #5: Having a great time with Mike BUT trying to get over the guilt of how much he kept stopping for me. DUDE: You're training for IM Austin. It's cool. You could have gone on. Thanks though. It was a lot of fun.

BONUS #6: Exceeding my own time goal.

I got back to the convention center. There is literally NO ONE there except maybe 5 riders. The 5 I rode down with.

They had a big lunch prepared for us, but all I wanted was to warm up. I grabbed a cup of super hot coffee and loaded up my gear to head back to the hotel.

Shower and hanging out that afternoon was glorious.

That night I had another great dinner with Coach Mike, Coach Dave and the CU Tri Team.  I'd met Dave before, but this was the first time that I was able to talk to him. He's a really great guy. He's one of those guys that you could just hang out with. CU tri team was awesome. I met some really great "kids". That team really loves their coaches.

When I went to bed that night, I was laying there thinking, "WOW. I just can't even believe I did that today." Throughout the day, I met some great people and learned a lot about riding as they were giving me pointers or giving me advice about which other tours to do. (I've only done Elephant Rock and the MS 150).

A GREAT day in the books.

Day 2 of the Challenge, up next.