Don't read this post. Just sit there and listen to Dolly. It'll be the best 5 min of your day....trust me.

It's been a looong time.

Without rehashing the past, here's what happened in the past year:

I wasn't ready to race. And, I was careful to not overdo anything.

Around the same time, Liz asked that I start thinking about my goals. What did I want to do this year and next.  I gave this a lot of thought. I was feeling so much better. I was physically and mentally in a great place.

I told her, "I'd like to qualify for Nationals again next year. I don't know if I'll actually race. But, I'm in the top end of my age group. It'll take a lot of work to qualify with all the new 50's year olds".

In June a local race director posted that a NEW big huge race was coming.


Then the race was announced....it was going to be a multisport festival that included a supersprint!

Well hell. I don't have to be in super great shape to race a supersprint. Talked to Coach Liz, who was all like, "Let's do it!".

And the race was on. Long story short. THIS HAPPENED. 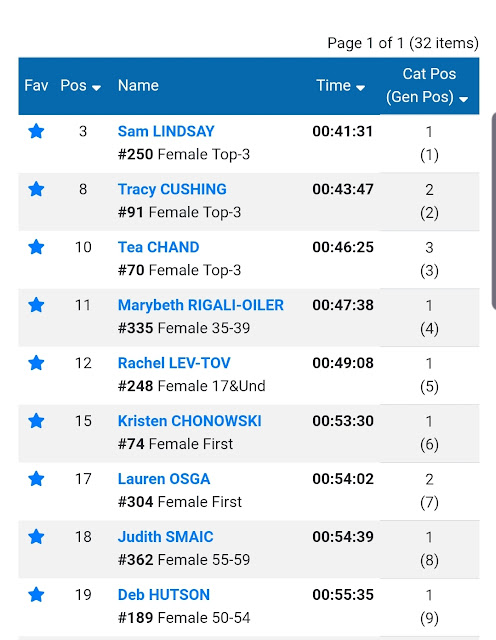 I was 3rd OVERALL....and qualified for Nationals.

More importantly, I had a blast. I made some dumb mistakes that were the result of not racing for a year, but I just laughed them off and made note: Don't do that again.

I had so much fun that I raced a sprint 2 weeks later. If I told you my goals, you'd think I was crazy.

Of course, make NEW mistakes and not the same ones I made last time.

This time, I won my age group. I was probably MORE surprised about this one than the overall podium because I wasn't sure if I had the fitness to do anything more than just get out there and do my best.

And then, I shut it down. Two races in two weeks, and I was ready to hop back on the off season bus.

I signed up for Coretober through MSM/JHC Coaching. I will loosely participate in Swimvember. (Even this is up in the air). I just started a new strength class that I really like.

Don't ask what I'm doing next year. I don't know. Liz and I have talked about it, but I don't want to make any decisions until next year.  With the changes in the business, Oct-Dec is going to very challenging. I want to enjoy my time and keep having fun with training....while maintaining my sanity through our busy months.

Sometimes, I just need to step back and take a breath and say, "Look what I've done. Let's just absorb this for a little while".