Sometimes, "giving up" IS the right answer 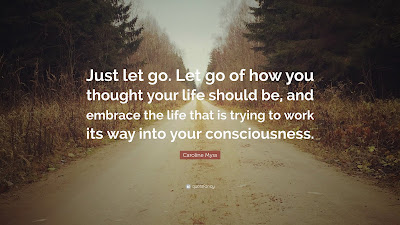 We live in a world where "giving up" is bad. We're supposed to be FIGHTERS and blast through any challenge/issue/problem that comes our way.

That's bullshit.  Sometimes, "giving up" is exactly what we need to do.

About a year ago, I read a blog. The post was supposed to be about how strong the athlete was because he fought through the urge to give up.

He has been doing triathlon for a long time, but he continues to have goals that are unrealistic for himself (today) at the age he is.

He had put so much pressure on himself to compete at the level he was back in the day, that he completely shut down his ability to hit ANY goals.

He was getting ready to give up triathlon, when he decided to do one last sprint.

He won the race.

Why? NOT because he didn't give up, but because that's precisely he did. He emotionally let go of who he used to be. He let go of those unrealistic goals. He raced in the moment for the sheer joy of racing. Without that pressure, he raced to the best of his ability for where he was right now.

Everyone was congratulating him on his ability to fight through it. I was thinking the exact opposite. I believed that his success happened because he did in fact "give up". He gave up an unrealistic expectation of himself. People don't want to see themselves as quitters. "NEVER GIVING UP" means he's a winner, a champion. "Giving up" means he's a failure in our society.


I'm here to tell you that it's ok to give up. Sometimes, it can be the healthiest choice. It's not easy to do, and it requires a healthy dose of self-awareness.

Of course, we need to know when it is appropriate to give up.

It's ok to give up when:
1.) A goal is no longer personally important
2.) When a goal is unattainable

I'm not a psychologist. So, I went on the hunt to find out if there was any such thing as "giving up"  being a healthy option.


Lo and behold. The psychological term for this is goal disengagement.

We live in a world where we are supposed to continue working for a goal until it is achieved. But this is locking us up emotionally. We are stuck of this mode of having to reach a goal before moving on to the next.

There's nothing wrong with you other than the fact that the goal might no longer be important to you. It's time to let it go.

Bearing down on this goal means we are missing out on other goals or interests that we might want more. We are stuck, thinking we can't move on until we finish the initial goal.

Many times over the years, I have written that it is ok to change your goals. Changing a goal doesn't mean you are a failure. It means your life has changed or your desires have changed. A new goal is NOT a lesser goal. It is simply a different goal. In some circumstances, you need to accept that your goal is unattainable. This is probably the hardest one to get over. If you run 5ks at a 10:00 pace, you have to accept that your goal of running a sub 20 5k, is probably not attainable.

Setting goals is a different topic.There have been many articles written about the topic, by people much smarter than me.

For those of you who are new to my blog, last year, my husband Mr. Tea had a major health issue. The day he was rushed to the hospital, he was 321lbs.  Over the course of the year, he's lost 131lbs. He had a goal weight that he wanted to reach. He was never able to get there. His weight would bounce up and down over the same 10lbs.

One day, he said to me, "I'm not going to shoot for that goal anymore. I'm healthier now. I feel good at the weight I'm at. I'm just going to eat right right. Whatever my weight is, it is".

Guess what? Once he did that, he lost more weight, and his weight stabilized at a healthy point. No more up and down the same 10lbs.

Give up to move on.

It wouldn't be right if I write this entire post if I didn't talk about what this means to me.

Sad to say, I fell into this trap. I was writing about "changing your goals is ok". Blah blah blah. I was the epitome of "do as I say not as I do".

I was in the trap but didn't even realize it.

I have been racing short course for a number of years now. I set two goals a few years back.

The times that I set were not unrealistic at all. However, I had clamped down on them. I absolutely would not attempt an Ironman until I met those goals.

YET, those goals were completely arbitrary.

I made up those goals.

Time goals are the worst goals to have in triathlon. TRAIN to time goals, but the weather, the course, so many external factors come into play on race day.

There is no law or rule saying that we have to accomplish X before we move on to Y.

And most importantly, I can return to those goals at a later date.

A goal deferred is not a goal defeated.

Once I realized and acknowledged that, I felt free. I was no longer under the weight of attempting and failing to meet a particular, completely arbitrary, random goal.


I wrote this post on purpose. I have decided to move in a new, exciting direction.

It's time for me to work on a new, completely different goal.

Twelve years after doing my first triathlon, I'm going to do an Ironman. 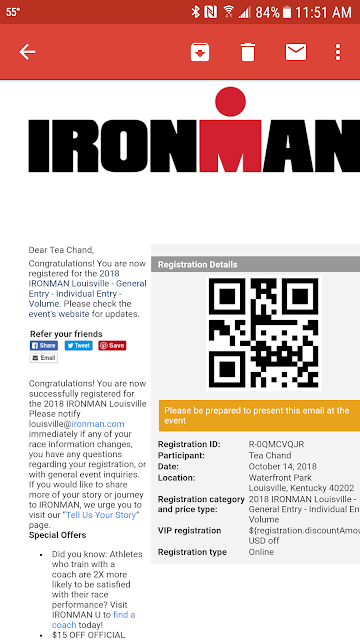