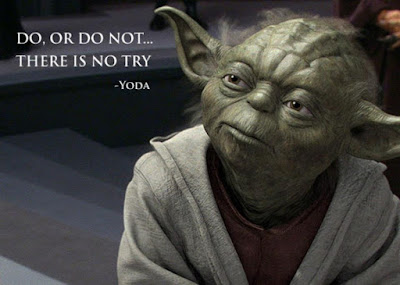 Yoda was full of shit.

A couple of weeks back, I was physically tired and had masters on my schedule. I showed up and thought there was no way I was going to keep up.

We ordered the lane, and I was second. The entire time I said, "I'm going to stay to the right, pass me if you need to".

I was determined to give it everything I had even though I felt like I had nothing.

Something magical happened. I was swimming fast. I switched places with the leader and was lapping the last people in the lane.

Afterward, I sat in the parking lot, completely amazed at what I did. I furiously typed up my notes in trainingpeaks.  Coach Liz responded with, "Sometimes all you have to do is try".

Once again, it's simple but not easy.

On various social media sites, I see comments such as "I didn't have it today. I called it quits. My legs were dead. I'm too sore. LIVE TO FIGHT ANOTHER DAY"!

These are precisely the days that we need to push through.  If you are working with a coach, your coach knows how you feel. There is a reason for that workout.

Last year, Mr. Tea......the BEST man, almost died due to a major health issue. When it happened, he was over 100lbs overweight.

Unlike many people, he took this incident seriously and set out to change his life. He has now lost 119lbs; eats an incredibly healthy diet and exercises every day.

Because he was overweight for so long, he has to re-learn what "healthy" feels like. It's uncomfortable getting healthy. On almost a daily basis, I'm sore or my legs feel dead or I'm tired or.....there are days that I'm just not right. (A good example was yesterday's open water swim. I felt uncoordinated and couldn't fix it).

I'm not one to complain. You'll never hear me complain about the heat or about a course being too hard or water being too cold or *me* being sore or any of that. Likewise, I never use any of those at an excuse for race times or training paces. And, as I said, I don't use them as an excuse to quit a workout.

After the open water swim, I had an hour run planned.  I'd had a weekend of very tough workouts. I was feeling the open water workout. Running was the last thing I wanted to do.

Of course, I knew I would do it, anyway.

Because I don't complain, it comes across as though it's easy for me.

With Mr. Tea taking on new exercise challenges and learning how his body will feel, I really wanted to make sure that he understood that what I do......it isn't easy.

Before I left for my run yesterday, I said, "I want you to know. I'm tired. My legs are sore. I don't particularly want to run, but I'm going to do it anyway. This is what people don't see. When you drive by me, know this......I'm struggling".

I was running ugly.

After a 30 minute warm up, I ran track intervals. The entire warm up, I kept saying, "All you have to do is try".

When I got to the track, I gave it everything I had. I emptied the tank.

I've never emptied the tank before.

I ran my fastest intervals ever. I saw paces that I've never seen before.

I sat on the side of the track and sent off my notes to Liz. I could barely contain my excitement.


This is what people are missing out on when they quit a workout. They are denying themselves the chance to breakthrough, mentally.

The next time you're tired or slow or feel the dreaded dead legs; hell, if you are getting off the couch for the very first time, remember.