I can't tell you how many times I have sat down to write, start a post and then leave it unfinished.

I'm caught in a cycle of the sucks. I can't seem to get out of it.

I write, and I think, "Oh, does this sound too much like POOR ME?" I don't mean it to sound like that. I'm tired of talking about all this crap. I can only imagine you're tired of hearing about it. At the same time, it's real crap that's going on.

I sat down and ate these... 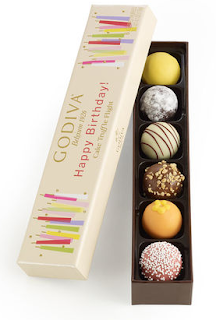 because FUCK IT ALL. It's my BIRTHDAY WEEK.

If you have kids, you might be able to relate to this story.  When our sons were growing up, their Fall Break from school always fell during my birthday week.

It was THE most fun week. We would buy Halloween costumes and candy. We would gather up ALL the free birthday foods coupons. Every day, we would get some new free food. One day, we'd get a cupcake; one day a free lunch; and on and on. (We'd even go the day after Halloween to load up of clearance priced candy).

They enjoyed it so much. How often do you go out and eat delicious and bad for you, food for an entire week?

When they moved out, I realized how much I was doing because they enjoyed it so much. All of a sudden, going out to get all that free stuff.....just for me....had sort of lost its appeal.

On top of having pulmonary embolism....if he has several blood clots is it plural?

THEN, I got sick.

THEN, he got worse.

And, I'm back to administering medicines again.

It's the cycle of the suck. I'm telling you. I can't seem to get out of it.

We had a birthday dinner planned, but because Mike's new issue is highly contagious, we had to cancel. I'm basically wearing rubber gloves (don't get any ideas) and washing my hands so much, I feel like I've torn off a layer of skin.

It's all ok, though because I decided that no matter what shitstorm is coming our way, I'm going to enjoy my birthday week as much as possible.

I went out an picked up my free cake.

I ate my free box of truffles

Tonight, I'm getting my free pizza.

On my birthday (Thursday), I'm getting my free pastry.

I don't have a lot of time where I can just be "me"; this week is definitely the week that I am celebrating ME. I'm going celebrate the fact that I'm stronger than I thought I was (just 6 months ago)...with a strength that goes far beyond anything triathlon can throw at me. I'm going to celebrate the fact that being sick and administering medicines is a lot more fun than being dead. I'm celebrating my workouts where Liz told me "just go ride. just run. do whatever you want to do today".

We might not have even been through the worst of it yet, but this will all pass. As Mr. Tea said yesterday, "Just imagine in a year from now when we can look back on this and say 'remember that shit?"

Yes. I can picture that time.

Until then, I'm going to keep doing what I'm doing. I'll run 49 minutes on my birthday, for every year I've been around. I'll eat my pastry and drink my coffee and take those few minutes of the day to enjoy the quiet and think about what I'll be doing a year from now.