I don't exactly know how I got on this topic, probably a stream of consciousness.

I started thinking that I'm willing to do whatever it takes to reach my goals. Then, I asked myself, "Are you? Are you really willing to do that?"

It's a logical question. I've always wanted to think that I have been, but reality is different. "Whatever it takes" is all nice and warm fuzzy on a beautiful Spring day.

Whatever it takes is truly WHATEVER IT TAKES at 5am in January when it's 10 degrees, and I have to swim outside.

I admit to wanting to do this in the past but being to "weak" to do it. I know "weak" can sound harsh, but I've said this over and over to people.

I mean "weak" as in "I don't really want to get out of bed to go swim or bike or run" when there's really nothing wrong with me.

Being tired is an excuse. EVERYONE is tired.

Unconsciously, I guess I've been working toward WHATEVER IT TAKES. Each new "thing" would always take me awhile to adapt.

I throw a tantrum. I kick and scream. Then, I do it. That's my history.

If I'm going to end up doing it anyway.....Maybe, just maybe, I could use the energy that I put into my tantrums....into REAL training...instead of complaining?

Over the past weeks(?), I don't know how long it's been. Let me set the stage a little bit. In triathlon, unless you are doing Austin, Miami, B2B, Arizona, FL, your season is pretty much over (in the Northern Hemisphere).

I hang out with a lot of triathletes nowadays. The questions always goes to the "off season" training. I know everyone always means well, but invariably when I tell them what I'm doing, I get the exclamation, "It's THE OFF SEASON. YOU NEED UNSTRUCTURED TIME OFF."

This has been going on for a few weeks as triathletes compare notes to see who is doing what.

I'm laying in bed thinking about these conversations.

I think I have changed over the past year because my relationship with my Coach has changed. Last year, I didn't always do what he said. I wouldn't say that I was argumentative, but...well, I was argumentative. We tried a swim-focus, and it didn't go over well....in fact, it lasted all of a week. I had too many other things going on at the time. At THAT time, I wasn't willing to do WHATEVER IT TAKES.

A few weeks back, he told me we're going to do a swim focus again, 6 days a week of swimming. I didn't ask him "why". I didn't argue. I started formulating my plan. I told my friends and family. They took bets. The over/under is two weeks.

But I ignored them and took a look at why it didn't work last year. I am determined to make it work this year. Instead of saying, "Yea. They're right. I can't do this." I sat down and came up with a plan to make it work. Fortunately for me, my friend Suz is willing to help me through it. She's volunteered to swim with me as much as possible.

This year, I'm excited about the swim focus. I'm going to do WHATEVER IT TAKES.

Then again, I always seem to do better when I know someone else thinks that I can't do something.

Last week, it happened again. Coach informs me that I'm not eating enough. I'm listening to him, and I start thinking, "What do I have to do to make this work?" I don't know how much I'm eating, but from the sounds of it, he wants me to eat double what I'm currently chowing down on. I don't track my food, and I hate tracking food.  But I'm willing to do WHATEVER IT TAKES. So, I went to the store and bought a week's worth of "new" groceries, and I logged back onto MyFitnessPal and started tracking my food again. .

I have to admit that the first days were really difficult. I don't think I've ever felt so sick. But he warned me it would happen. Over the next couple of days, I still felt full, but I started getting hungrier and hungrier.

The week's worth of groceries that I bought...lasted me 3 days, but I feel better than I have in a long time. It really isn't easy. It requires a lot of planning. I have a list of "emergency foods" that I can grab when something unexpected happens or I'm running late or I'm hungrier than normal.

I explained this to a friend, and her response was, "Why are you doing that? Aren't you afraid of gaining weight? That's too many carbs."

I didn't even know how to respond to her. That perspective is so wrong on so many different levels.

I have to be honest....that thought NEVER even occurred to me. Coach told me to do it, so I'm doing it. PERIOD.

The only thought I had when he told me was just like when I found out about the swim focus: "How do I make this happen?"

I know I will always have days where I just don't want to get out of bed or feel like I can't leave work to do my swim.

For those days, I've posted this at work and at home. 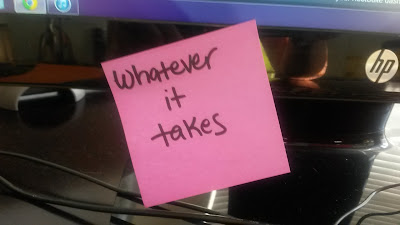